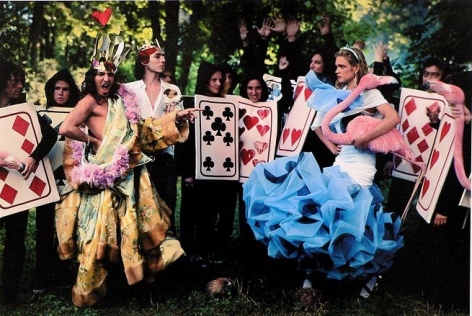 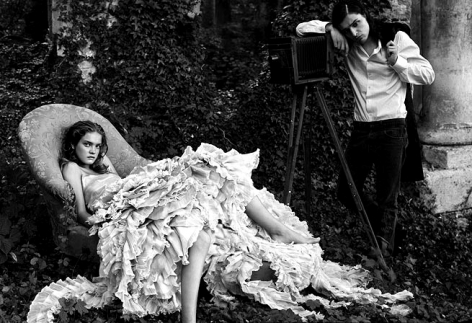 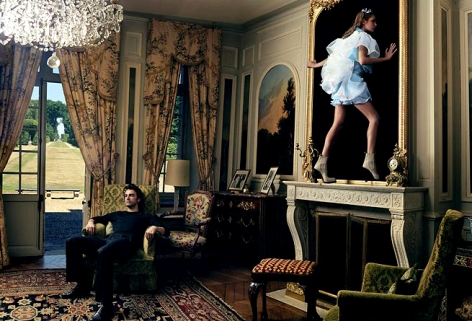 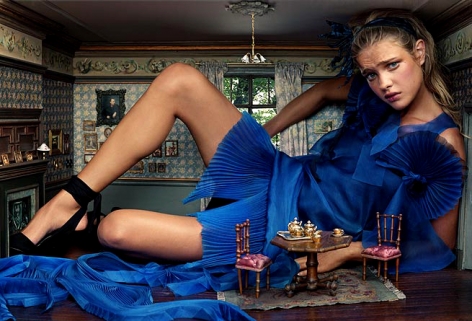 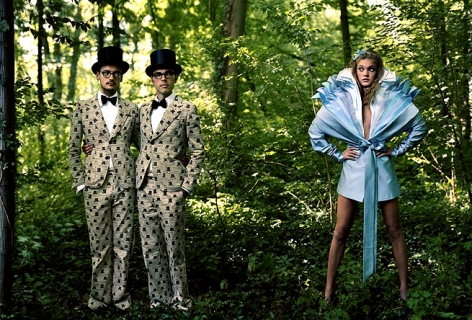 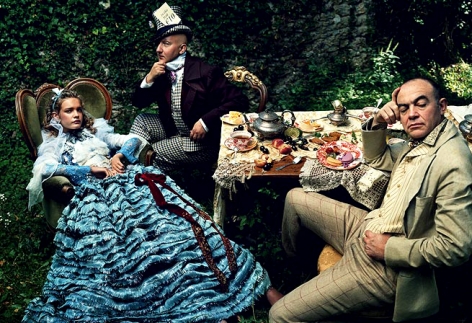 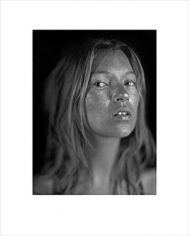 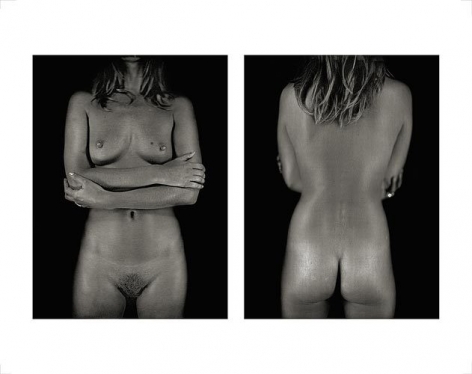 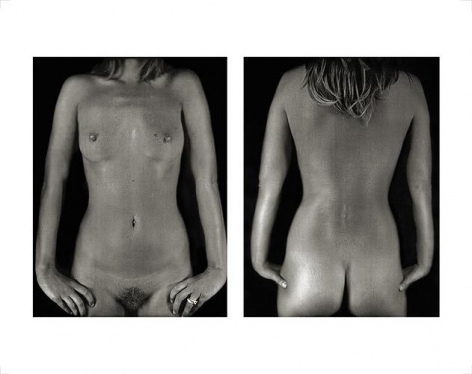 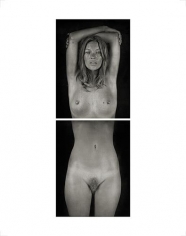 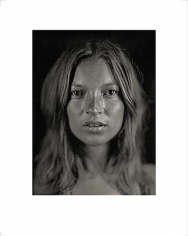 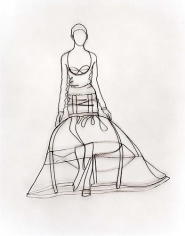 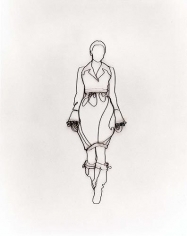 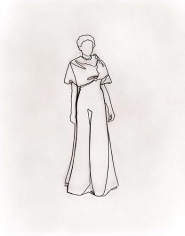 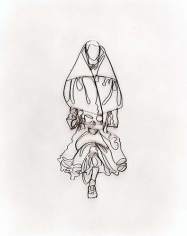 "Inventive Fashion Photographs – Chuck Close, Annie Leibovitz, Vik Muniz - looks at three unusual fashion shoots done on assignment for mainstream magazines by three of today's leading fine art photographers. Bringing their trademark styles to the exigencies of the editorial assignment – each photographer produced work that represented their own singular vision while expanding the boundaries of the commissioning magazine.
Beginning with W Magazine's September 2003 tribute to Kate Moss – where artists and photographers ranging from Lucien Freud to Bruce Weber worked with Ms. Moss with virtually no restrictions - Chuck Close's unflinching daguerreotype studies of Kate Moss's unmade-up face and body are images that continue to resonate. (It should be noted that these pictures were selected for the exhibition well before Ms. Moss's recent troubles.)
With no clothes, beauty products, or accessories to sell, these pictures are still relevant to fashion as they examine every pore of arguably the most influential model of our day. The dispassionate nature of Close's lens shatters most illusions of natural beauty, but in defying both today's dominant airbrush mentality and the false surface of the fashion and beauty industry Close finds in Moss's face - in critic David Cohen's words: "a kind of defiant white trash beauty that recalls Dorothea Lange's classic depictions of impoverished migrants".
For Close the experience of the shoot was a pleasant surprise. "She wore no makeup; she hadn't combed her hair, and she never even glanced in the mirror. But she said, 'I've had enough pretty pictures made of me.' She understood what it is that I do, and she was perfectly willing to comply."
In December 2003's VOGUE magazine, Annie Leibovitz joined the roster of photographers imagining Alice in Wonderland from Lewis Carroll himself to Richard Avedon, Cindy Sherman, and Anna Gaskell.
Leibovitz's re-staging draws its inspiration from Sir John Tenniel's original illustrations but casts its characters from fashion's own fantastical universe. Thus Natalia Vodanova, who once upon a time helped support her family by selling crates of fruit in Nizhniy Novgorod and now enjoys multi-million dollars contracts with the likes of Calvin Klein and L'Oreal, becomes the new fashionista Alice. Christian Lacroix plays the March Hare, Viktor and Rolf Tweedledum and Tweedledee, and John Galliano the Queen of Hearts.
As in many of Leibovitz's most iconic images the central conceit echoes some aspect of the sitter's fame, but the artifice of the construction is belied by the skill and believability of the execution. These pictures, with their storybook color and artful mix of natural and artificial light (a technique which Leibovitz pioneered) stand as remarkably successful set-pieces in Leibovitz's ongoing body of work.
Vik Muniz's fashion "Pictures of Wire", commissioned by the New York Times Magazine in September, 2004, re-create the line and form of four silhouettes from the Spring 2005 season in re-photographed wire renderings.
Muniz's pictures are playful illusions that twist and redefine our perception of the commonplace and the fantastic. Muniz first sketches an image, then sculpts or composes it out of material not usually associated with the creation of art, and finally creates a photograph of the object he has produced. By drawing The Last Supper with chocolate syrup, or constructing a Van Gogh out of Pantone swatches Muniz flouts artistic convention and high art seriousness. His pictures are never quite what they seem, challenging the viewer to rethink images and their meanings by taking a second glance. As Vince Aletti pointed out in the Village Voice, "[Muniz] has teased the medium mercilessly and with an infectious glee. He makes pictures of pictures -- sly, punning documents that subvert photography by forcing it to record not the natural world but a fiction, a simulation."
In Muniz's wire fashion photographs, we see that what interests him most (and also applies to Close and Leibovitz's work in this show) is the representation of objects rather than the objects themselves, and the dislocation between expectation and fact, imagination and reality.


For further information please contact Danziger Projects at 212 629 6778 or at: info@danzigerprojects.com.